Beastmen are a savage, bestial humanoid race found all over Mennara.

The beastmen are primal and deadly, and have existed on the continent before any signs of civilization. Beastmen hunt in packs and fight with a savagery that few creatures are able to survive. They are larger than the average human, and have razor-sharp claws and large teeth. Beastmen often travel through caves and tunnels as they prefer to lurk in darkness.[1]

A silver-maned beastman named Uzrakhal once led an assault on the city of Tamalir with a pack of thousands of his brethren. He was confronted by Sir Alric Farrow, the proclaimed Guardian of Tamalir. The knight decapitated Uzrakhal, though his pack killed Sir Farrow seconds later.[2]

Although beastmen can be found anywhere on Mennara, they are often found on the Broken Plains.[3] 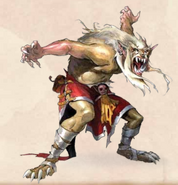 Retrieved from "https://terrinoth.fandom.com/wiki/Beastman?oldid=1208"
Community content is available under CC-BY-SA unless otherwise noted.