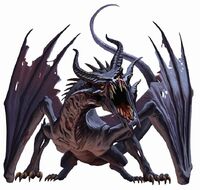 Dragons are massive, winged beasts that breathe fire. Dragons are some of the deadliest creatures in all of Mennara.

There are several subtypes of dragons.

Crypt Dragons are unlike standard dragons in that they are far more interested in magical items. These dragons tend to nest near graveyards and tombs, and wield powerful artifacts that carry dreadful curses.[1]

The most common and primal of the dragons are Feral Dragons. These creatures are purely instinctual and lack the intelligence of other dragons.

Ice Wyrms are flightless, serpentine dragons who are found primarily in Isheim, to the north of Terrinoth. They are at home in snowy regions, where ice protect their already nearly invulnerable scales.[2]

Shadow Dragons are a very rare and powerful type of dragon. The shadow dragons disappeared for many years after the Dragon Wars, but have since emerged from the darkness.[3]

The Dragonlords are a group of powerful, ageless dragons who dominated Terrinoth several centuries ago. 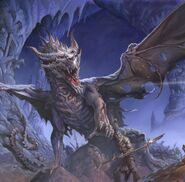 Retrieved from "https://terrinoth.fandom.com/wiki/Dragon?oldid=1214"
Community content is available under CC-BY-SA unless otherwise noted.