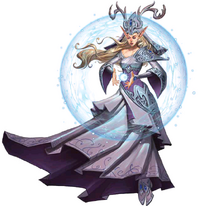 Elves are tall, beautiful humanoids with pointed ears. They are one of the prominent races throughout Mennara.

The most ancient of all civilized races, elves can be found in several different societies, though the majority are found as members of the Latari Tribe.

Caste is very important for elves, and they are often separated by two types: Highborn and Lowborn.

Highborn elves are closely connected to the Empyrean plane and rise to power as the most devoted elves.

Lowborn elves make up the ranks of the majority of the Latari Tribe armies. Lowborn elves are trained as Deepwood Archers, Leonx Riders, and other positions in low ranks.

Elves that reside underground in the Dunwarr Mountains are called "deep elves." The Tribe of the Deep Elves feels great shame for their susceptibility to Malcorne's corruption. As penance, these elves hunt down demons from the Ynfernael plane.

Elves who have brazenly foregone the elven caste system call themselves "Free Cities Elves." These elves have often consorted with humans, leading to an intermingling of the bloodlines. Free Cities Elves can often be found in any of the major cities in Terrinoth.[1]

Retrieved from "https://terrinoth.fandom.com/wiki/Elf?oldid=1217"
Community content is available under CC-BY-SA unless otherwise noted.