Ferrox are muscular, green-skinned humanoid creatures that had at one point been razorwings. [1] They are commonly found throughout all of Mennara.

Created by Devis, a powerful sorcerer, during an experiment, ferrox have since adapted to the changing times. They have strengthened themselves and gained the power to sap the strength from their opponents, using it to regenerate themselves.[2]

The ferrox have membranous skin stretched between their arms and torsos that they can use to glide. Legends in the Mistlands speak of ferrox transforming their victims into their kind with a bite.[3]

There is a sorceress, called the Mistress of the Ferrox, who has used magic to dominate over a pack of ferrox and command them.[4]

Dire ferrox are also known to exist in parts of Terrinoth.[5] 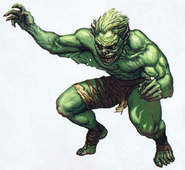 Retrieved from "https://terrinoth.fandom.com/wiki/Ferrox?oldid=1220"
Community content is available under CC-BY-SA unless otherwise noted.