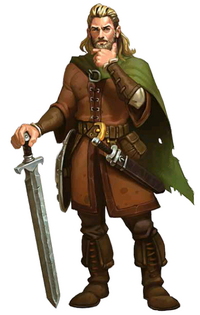 Humans are a the most prominent and diverse race on Mennara.

While humans lack the natural gifts bestowed upon other races like elves and dwarves, they make up for it in their willingness to learn, their determination, and their adaptability. Humans can be found on every continent of the world, and vary greatly in appearance. The humans of Terrinoth are typically paler-skinned, while humans of Al-Kalim and Lorimor are darker.

More than any other race, humans have a need to adopt some form of hierarchy. This is especially evident among the Daqan Baronies.[1]

Retrieved from "https://terrinoth.fandom.com/wiki/Human?oldid=1226"
Community content is available under CC-BY-SA unless otherwise noted.