Medusae are serpentine creatures with multiple limbs and powerful magic. These female monsters can be found throughout Terrinoth, Isheim, and Zanaga.

A medusa often seeks out two others of her kind to form a coven. Many years ago, a coven of medusae created the myth that they could turn living creatures into stone. By doing so, their opponents would shield their eyes from the creatures, enabling the medusae to use their spells without threat. Some legends claim medusae are demons. Several medusae have been in employ of the Forgotten, a cult revived by the sorcerer Nursak with the intent to enslave the broken, the poor, or the outcast civilians of Terrinoth.[1]

The magical abilities of a medusa are varied, though the creatures have been known to petrify, poison, and teleport their victims through time and space. One medusa simply called the Old Crone once petrified an entire village in Isheim. She had at one point taken a human lover named Mikael. Mikael, who had become a priest, sent adventuring heroes to retrieve the Crone's Cauldron of Tears, which resulted in her death.[2]

A woman named Orara Stone-Gazer claims to have been beautiful once but is now cursed with transforming anyone who looks into her eyes to stone. It's possible she was at one point a human but was transformed into a medusa (or medusa-like creature) by a different force.[3] 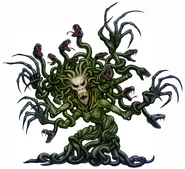 Retrieved from "https://terrinoth.fandom.com/wiki/Medusa?oldid=1444"
Community content is available under CC-BY-SA unless otherwise noted.