Razorwings are winged, bat-like creatures indigenous to Terrinoth. They are commonly found throughout all of Mennara.

Feared by many across Mennara, razorwings are said to be able to cut through a column of veteran soldiers in mere minutes.[2]

On the continent of Zanaga, razorwings are considered to be sacred to the god Var Ni, the Nightlord. These razorwings are far larger and deadlier than those found on Terrinoth.[3] 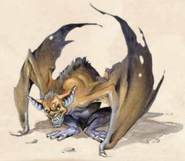 Retrieved from "https://terrinoth.fandom.com/wiki/Razorwing?oldid=1238"
Community content is available under CC-BY-SA unless otherwise noted.