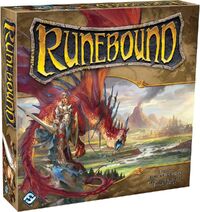 Runebound is a series of board games created by Martin Wallace and Darrel Hardy and published by Fantasy Flight Games in 2004. In Runebound, one to six players take the role of adventurers who seek out quests and complete challenges to gain power and ultimately complete an objective.

Very little changes between the first edition and the second edition (released one year after the first edition). In the base scenario, "The Rise of the Dragonlords," the evil necromancer Vorakesh attempts to resurrect High Lord Margath, who had been killed in the Dragon Wars. Vorakesh seeks out the Dragon Runes with the help of his minions, while the adventurers try to stop his evil plot.

In 2015, Runebound received a complete overhaul in its third edition. The game narrows the player count to two to four players, and rather than using dice for skill challenges and combat, Runebound (3rd Edition) includes double-sided pogs to be thrown into the air. Two scenarios are included in the base game, both based on the original Runebound: the first has the players compete to defeat Margath while the second involves the Corpse King, Vorakesh.

As of 2019, Fantasy Flight Games has confirmed that no more expansions for Runebound will be produced.

Retrieved from "https://terrinoth.fandom.com/wiki/Runebound?oldid=1322"
Community content is available under CC-BY-SA unless otherwise noted.