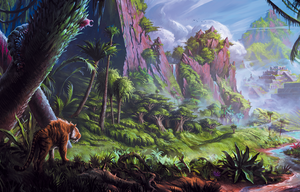 Zanaga is a jungle continent located to the southwest of Terrinoth.[1]

Zanaga is an ancient and primitive land where savage creatures dwell in the wilderness. The land went largely unexplored until recently, where civilized humanoid races have begun expeditions and invasions in hopes of wealth and treasure.[2]

A union among pirate lords from the Torue Albes formed to act as a sort of non-native government in Zanaga. This band of mercenaries is comprised of an army's worth of merchants of all imaginable races.

Retrieved from "https://terrinoth.fandom.com/wiki/Zanaga?oldid=1249"
Community content is available under CC-BY-SA unless otherwise noted.